Every once in a while, when I'm searching out reference for something I start to wander through the endless depths of the interwebs. With so many different 'sources' now cashing in on the 'if you like this you might like this' ideal it's hard not to get sidetracked and lost in things at least once in a while.

Well that's where this originally started. I was looking up something completely different, runes or glyphs of some persuasion and I ran across this image. 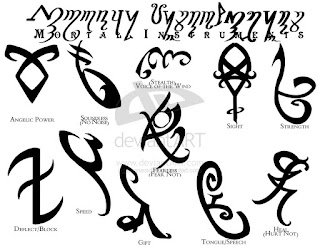 At the time it was literally just a 'hey those look pretty cool' and I tucked them away into my 'ideas' folder. Once I had a little 'down time' I dug them back out and started doing a little more digging into them. Now don't get me wrong right off the bat they looked cool, once I scratched the surface I realized why I recognized them. Mortal Instruments, before it comes up, no I have not actually read the books, I have skimmed over one a bit a while back, but most of what I knew actually came from the movie they made back in 2013. As silly as it might sound I was mostly interested in that movie because of the clear sword he wielded. Come on, I'm a prop maker and it was a unique prop at the time. Anyhow I'm getting side tracked, I'll go into that in another post.

So runes, the runes were an interesting way to give them 'powers'. I have always loved the idea that something so simple and a bit of belief behind it can grant you some 'power'. Think about it this way, there is a reason it's still to this day called a lucky rabbit foot or a good luck charm.

I wanted to do something with this idea. I dug more and found out they had also made a TV series out of the books as well and it just so happened to be on Hulu. Great, that gave me a bit more to get the wheels turning. I watched a couple episodes and then I realized what I wanted to do. I wanted to go a little more classic with the idea of the runes. Items of power if you will, something you can carry in your pocket and pull out in that 'time of need'. I decided I wanted to do Rune coins.

I started work on digital etching files I would need. I was etching a few other things at the time so I ran a few on a test run with the other stuff. Here's a picture of the test board. 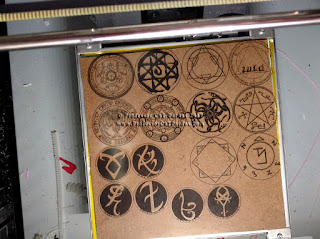 Turns out somewhere along the line with that etch the machine had a hiccup and skewed a good portion of the board. completely ruining most of the etches on the second run. If you look closely you can see it clearest on the  'strength' coin second one in from the right on the very bottom.

The second run I had run out of they board I was etching on so I tried a piece of thin pine sheeting I had sitting around. My thought was I was planning on molding these anyhow so the initial material didn't mater to much. I was very wrong this time around. 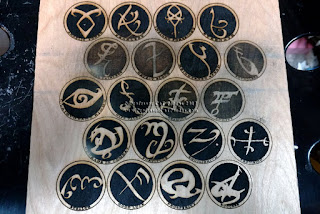 While initially the etch looked good once I pulled it out and started working on finishing it I found many problems. The first pretty straight forward it was to thick to make a typical coin out up. I sanded it down from the back but in doing so the board started warping. Next issue, I wanted these to have a raw metal cast look, something that the shadowhunter had a long tradition doing so they did it in the 'old way'. So once I had cleaned out the ash from the etch I got to find this. 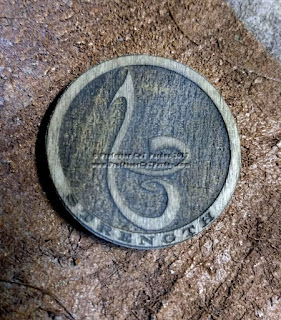 Now for a wooden coin, sure looks great but the wood grain proved very difficult to get rid of and I had 25 to do. This wasn't going to work. The good that came of this is it made me over think how to prep a board before etching. Which actually worked out a new system for me to do it in and I have to say I am very happy with it. And so the third attempt actually turned out wonderfully. Here's some pics.
Raw etch 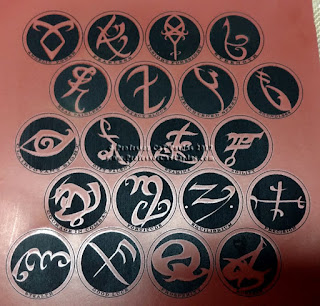 After a little finishing 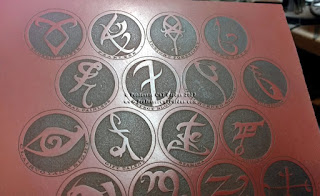 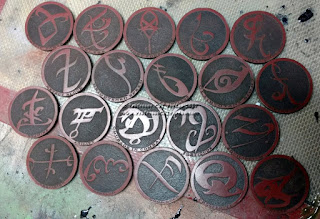 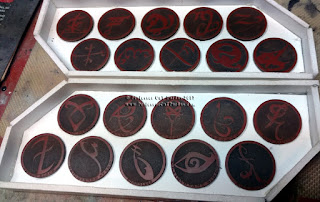 After the mold had set up I was quick to try it. I wanted to see these guys cold cast and see if they'd turn out how I had intended them to. The first casting I was thrilled with the results. 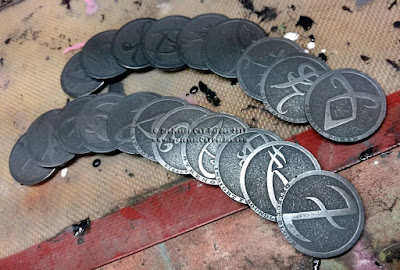 Now I present to you the finished rune coins inspired by Shadowhunters and Mortal Instruments. 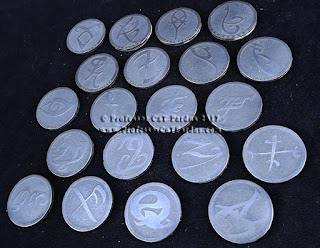 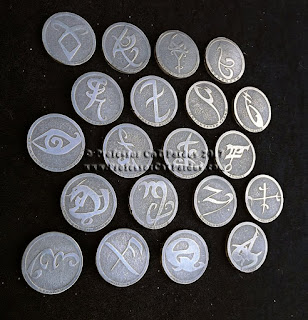 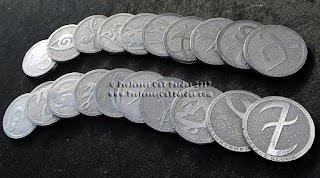 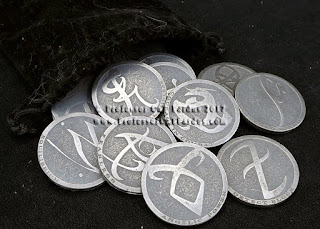 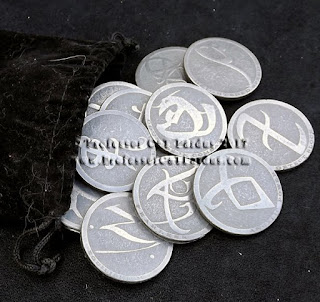 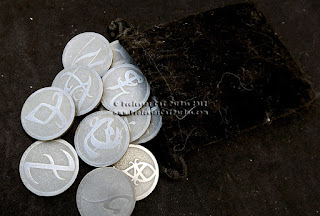 I gotta say I love how they turned out and I am proud to be able to bring them to you. Let me know what you think in the comments below.


If you'd like to get your hands on your very own Rune Coins. You can get yourself one or the entire set just head over to my Etsy Store.