So ages ago I remember the first time I saw the original Ghost in the Shell, I wasn't a stranger to anime but when I came across this one for some reason it struck a cord in me. The cyberpunk feel to it, when at the time things had attempted but I hadn't come across anything that quite captured the feeling, the atmosphere.

Ghost in the Shell stuck with me through the years. I had delved into every new release of the story they had released. I even hunted down the PS2 game they released, played through it twice in the span of a week. When there were rumors of a new live action in production I searched out any info I could find. In the process I decided to go back and watch Stand Alone Complex (S.A.C.) beginning to end, since originally I had watched it on Adult Swim and I knew I had missed a few episodes. When I had finished that I realized there was still more I hadn't seen Arise was next on my list.

Needless to say after watching Ghost in the Shell related stuff for probably 2 months I had the itch. I wanted to make something from it. I had been thinking about what I could possibly make that would, at least in my mind, capture the nostalgia I had for the series. Just a small something that hadn't been done before. Something subtle, one of those 'only a true fan would get it' kinda things.

I finally settled on what I was going to make, start with is probably a better way to say it but that's for other blogs. The Section 9 badge.

Turns out the morning I had started working on the badge steam released the Ghost in the Shell: First assault. I ended up loading that up and it ate away half my day but in turn only fueled the desire to make the idea real.

I started my digital work on a 3d model. It didn't take me all that long to get a model worked up and tweaked and printed out on Jarvis. Once I had the piece in hand I headed to the shop. I'm not sure if it was the excitement of having this thing real or the want to do more but I sanded it down and had a coat of filler primer in under an hour. While I was working on it my mind was swimming with other ideas at the same time, so the next day was pretty much sand it down, filler primer, run down do digital work, run to the shop, sand it down, more primer, finish digital work, start a print on the indivi... I'm getting ahead of myself. Long story short I had a lot of ideas in the pipeline. 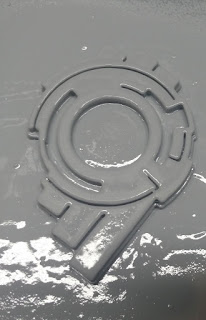 I ended up getting the badge finished to a nice smooth finish and boxed it up to mold. I had a few other projects working at the same time so I ended up having quite a few small molds to pour.I would share the picture here but I'll keep that one for a later post seeing as how it would give away some of the stuff I was working on.

After I had my mold poured and cured I couldn't wait to get a badge cold cast. I really wanted to see it metal and  shiny. So here is the first casting I did.

I loved it It was exactly what I had wanted. However I quickly realized that the fine lines I had in it were a bit to deep. A little bite of glazing putty and all better but that also meant I would have to make a new mold. So I smoothed it out even more and boxed up my new version and poured another mold. As soon as it was cured I did another cold cast in brass and I gotta say it turned out amazingly. Judge for yourself.

Then I wanted to see it in silver (aluminum) and that one was even better.

Here are the 2 together.

So there you have it the first of my Ghost in the Shell projects and personally I think it turned out pretty amazing. Tell me what you think in the comments below.


You can pick up your own over at my Etsy store