Back when I was working on the Section 9 badges and the Individual 11 pins I wanted to do a pin with the laughing man logo, however I was trying to 3D print it. The problem I ran into is i could not get the 3D printer to print fine enough to get the words around the edge legible without making the pin an obnoxious size. We're talking those big pins that were popular in the 90's so that one got put on the back burner.

Then about a month ago I had a 'just cut the head off the nail' moment.
Actually let me explain that reference. Once upon a time about 4 years ago I was making some throwing spikes out of 6 inch nails. I didn't want to have the head of the nail to interfere with throwing so I was shaving the edges off of the head with a grinder and then grinding it down to smooth. Basically taking forever to try and get a nice finish on the back of the nail. Then a very good friend of mine watched me doing this and when I was done put his hand on my shoulder and said in his most sincere voice.
"Cat, you know I love you, but why don't you just cut the head off the nail."
I literally had a face palm moment. I realized that I had way over thought the process and in doing so I had missed the easy solution. This same friend hangs out with me every week most of the time in my shop and I pass my thoughts by him all the time to try to make sure I'm not over thinking things, as I have a habit of doing.

Anyhow, I had one of those moments and realized I have a laser etcher. This entire time I could have simply etched the design into something rather than printing it raised. So I fired up my laser and got the design etched into some would. In both pin size and lapel pin size.

Unfortunately in my excitement to get it to mold I didn't think to get any pictures along the way. However I did get a few pictures of the glow enamel tests. 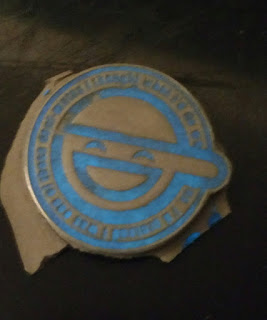 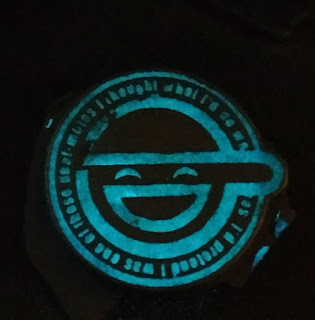 Once I got the enamel working mostly how I had wanted it to I decided to do 2 versions a silver and a white version of the pins. Here are the results.

I think they turned out pretty spot on to what I had originally envisioned and as you can see I managed to get them pretty small. Let me know what you think in the comments below.


If you would like to pick yourself up your very own Laughing Man pin or Lapel pin head on over to my Etsy store and grab one today.
Here