Project Commission from a friend: The Spacing Guild Pin from Dune

Back in July of 2016 I had something happen that surprisingly doesn't happen all that often anymore. A friend of mine actually shot me a message asking if it was possible for me do make some pins for her. She had two specifically in mind that she was hoping to get before heading to DragonCon.

The first one I want to share was from Dune. Now personally I grew up on Dune my mom was a huge fan of the book series and I'm pretty sure to this day has every book that's been published. I remember watching the original movie and then the extended 3 hour version. We even have a copy of the SyFy mini series. So needless to say I knew exactly what she meant when she asked if I could make her a Spacing Guild pin.

After sorting out exactly which Spacing Guild logo she was looking for I got to work making a 3D model it was a pretty quick process seeing as how the symbol was pretty simple, then sent it over to Jarvis to 3D print it up for me.

The smoothing ended up a little tricky but didn't take to long. Then I got it boxed up and poured the mold. I was working on quite a few things at the time so didn't get any pictures of the process but here are the results of the first casts. 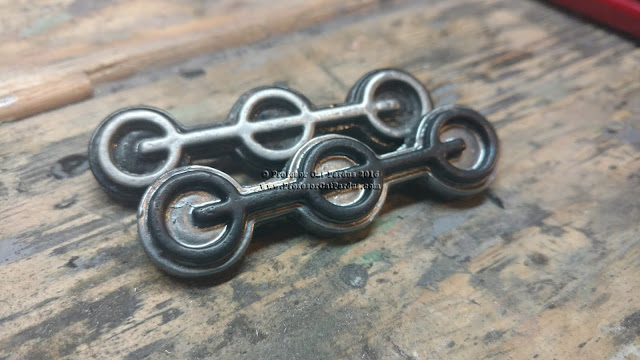 All in all a small side project but it had some awesome results. Let me know what you think in the comments below.


So if you would like to purchase one of your own and show your love for the Spacing guild and Dune head over to my Etsy store and pick yourself up one.
Here