I love Destiny when they announced that they would be releasing a huge new DLC called The Taken King (TKK) I was excited. I followed all the updates, and sneak peeks. When they finally released info that there would be new heavy weapon exotics that would happen to be swords I was very excited. I had already made both the hunter blade and the Sword of Crota, so for them to be releasing a new and usable melee weapon in Destiny was a moment of "yup I know my next project"

When picture started leaking I collected them. When they showed it in a live stream of new content gameplay I screenshot it. I collected all the info I could as it came along. I started my plans, I drew up blueprints best I could. The one thing that was hard to get a handle on was the actual size. Sure I could guesstimate the size, but perspectives and it moving about makes it hard to get it accurate.

When I saw that a few very talented people had tried there hand at 3D modeling these new swords I of course jumped on them. I wanted to compare there size to my plans. I took a look and realized very quickly that they just seemed to small. Now don't get me wrong a lot of the sword was very accurate but it seemed over all small for a "heavy weapon". In some of my screenshots this sword stuck over the guardians shoulder and nearly to his knee. This was the Claymore of Destiny, the weapon only a guardian could wield.

I went ahead with my research and decided I wanted this to be as accurate as I could make it. I wanted my guardian customers to feel the power of this Heavy Weapon Exotic Raze Lighter. I wanted it to seem bigger than life, so at a Con it would stand out as a mighty weapon not just a sword.

I printed out my plans and got to building. I 3D modeled the handle, cross guard, and the crystal. I went to printing those as I worked on the blade. 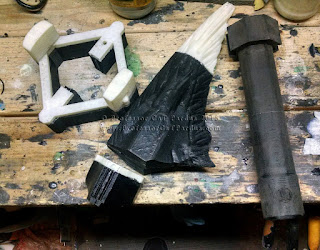 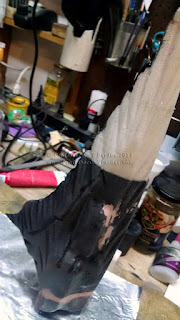 After I had all of my pieces nearly ready for molding I went back for one more reference and noticed I had the pummel all wrong. I had overlooked such a small detail I was actually kind of surprised at myself given I pride myself at the details. After modeling, printing, and finishing the new pummel, I was finally ready to mold this beast.

After everything was molded and peeled open I thought I was good to go. Time to cast my first Raze Lighter.

Turns out the initial fabrication was only the beginning. While most of the parts came out wonderfully, the crystal was just not turning out the way I had hoped, as well as, It was just to heavy. 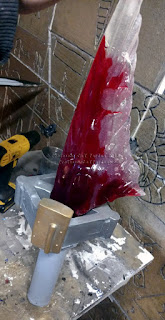 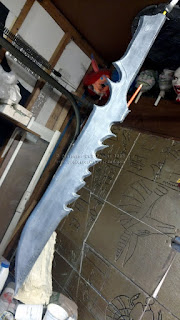 It took many test runs and each one that came out not quite right discouraged me. After all the work put in so far I just couldn't seem to get the crystal to look right. Don't get me wrong, some looked pretty good, but they weren't what I was looking for. Here are a few of the "not quite" Castings. 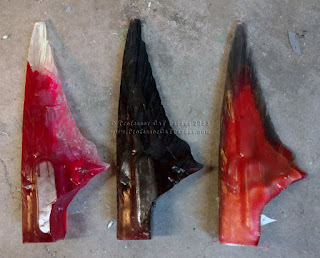 On a whim as I was slush casting yet another crystal I tossed some of my cold cast powders in between layers. That's it! I had gotten closer than any other casting it just needed more. I gave it another try, this time I put a lot more in, I had thought it would be to much but wouldn't know till I could de-mold it. When I pulled it out I was pleasantly surprised it had turned out exactly how I wanted it.  The weight issue was quickly solved after that. This monster measures in at 4ft 8 inchs (picture below) but only weighs about 3 pounds. Now I can present to you The Exotic Sword The Raze Lighter: 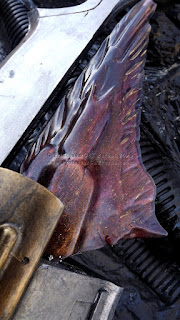 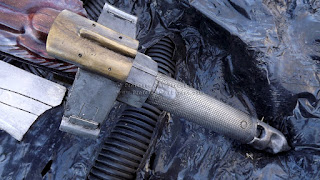 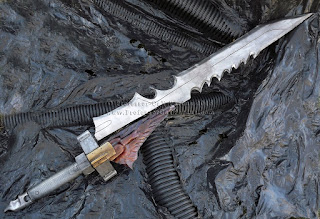 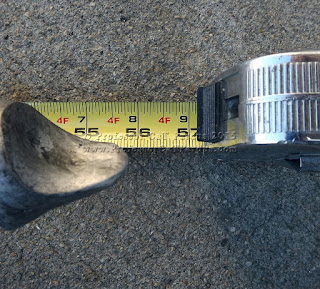 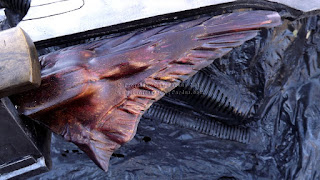 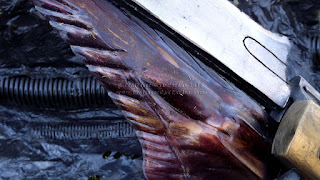 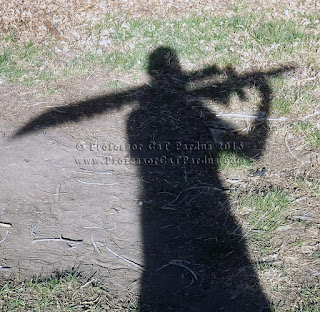 If you would like one of your own, head over to my Etsy store: here and pick one up today.