The Touch of Malice. The new Gjallarhorn of The Taken King. Personally, I still haven't managed to get it in the game but I did get to make it. The commissioner wanted it to be as accurate as possible. For those of you that have seen it or have it in the game, you already know that it is pretty much impossible to bring that piece scout rifle into the real world and have it actually do the same things. First off it has an ever turning gyro in the center on top of that the rings are not connected to anything on top of that it holds a rock that becomes a crackling storm cloud as you fire...
This was probably one of the most difficult and yet easiest builds I have tackled. The hard part was capturing the impossible gyroscope, I finally settled on having it act like a regular gyroscope (aka it was actually connected to the gun) I 3D modeled the middle section of the gun and printed it as solid as I could manage so that the rings and the incredibly thin top "rails" would not snap as it rotated. Once printed and mounted I gave the thing a few test spins and was presently surprised that they worked. Pretty good for my first try at a gyroscope. Just for the record no they are not perfectly balanced as I knew I wanted them to come to rest and what they held in the center there was no chance of balancing perfectly anyhow, so I was happy with "close enough". 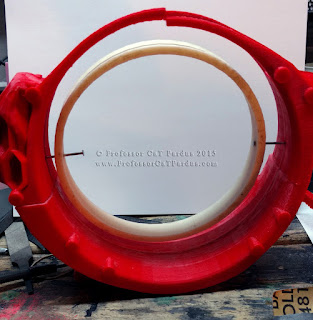 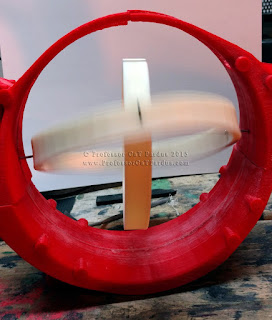 Next challenge, how do you make a tangible storm cloud. Believe it or not I rolled this one in the back of my head for a long while, in the meantime I built the entire gun around this one piece I wasn't sure how I would make. It was nearly complete when it finally struck me. I would take a "rock" and make put "storm clouds" all over it, and then make some "lightning" happens in those clouds.
So here's what I did my "rock" was actually a piece of scrap from a Sword of Crota had the right appearance to it so no paint needed. Also it was light enough to suspend with out it hanging it stayed just about perfectly in the center.
My "Storm Clouds" were actually an old miniatures fog/smoke trick. I put spray glue on my rock and then attached cotton balls all over it then pulled them off to leave gaps here and there. Now I a rock in the middle of white puffy clouds. A quick couple sprays of black over them and they became dark storm clouds with some white showing through here and there.
For the Lightning I added some more spray glue and sprinkled in some of my glow powder. It fell into the cracks and crevasses, and created lighting in my storm cloud.
All of this turned into the center piece for this gun. I suspended it in the center of the gyroscope with fishing line as it was the easiest way to keep it there and from a distance it would not look as though anything was attached but still had the strength that it wouldn't eventually snap and leave it hanging.
All of the ruins all over the rings were probably one of the biggest challenge as the only real clear picture only shows maybe 5-6 and there are tons on it. I poured over many game play videos of YouTube pausing whenever I could make out another ruin and drawing it out. Once I thought I had enough I went to carving them all.
Then I did something I never really thought I would do in prop making. I made an outfit for a gun. Yup, patterned it out from my build, cut the pieces from burlap and a grey canvas, sewed it all together, had ToM try it on made alterations as necessary, stained it, dyed it, frayed it, airbrushed some shadows and some highlights, and finally sewed all of the "course stitches" by hand. Then I dressed up ToM and he looked great.
All and all this was a simple yet very multimedia build. most of the bulk of the gun is made from EVA foam but as mentioned some parts that just wasn't an option. Here are a few progress shots, not a ton with this one. 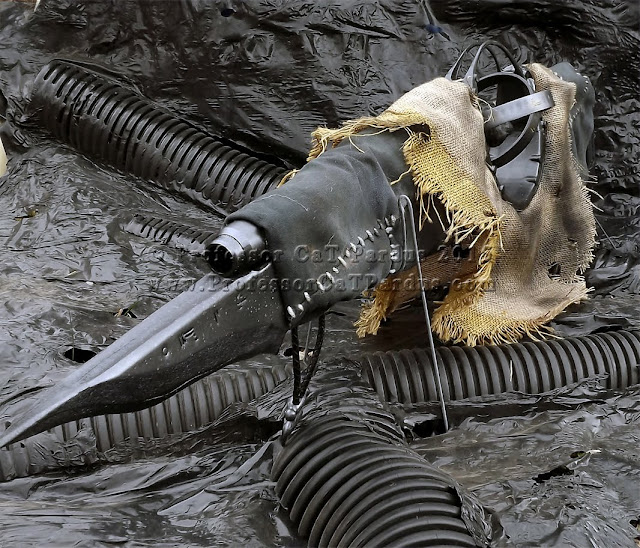 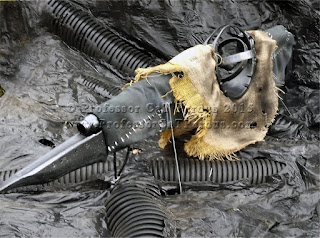 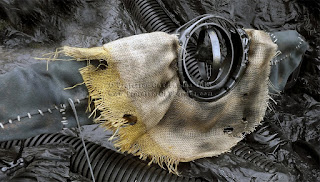 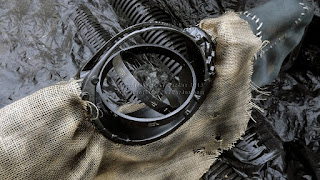 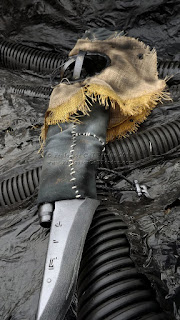 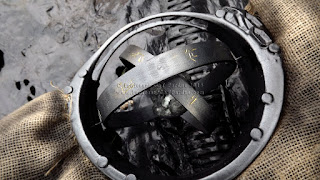 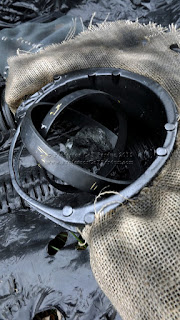 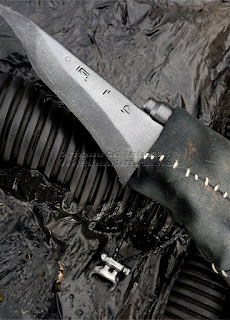 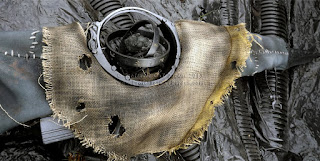 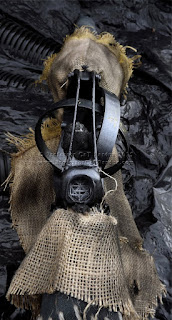 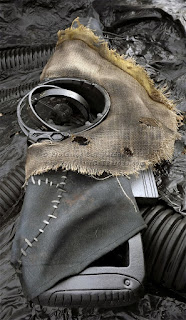 Please let me know what you think in the comments below. While this one is not currently for sale as this was a scratch built one off please feel free to visit my Etsy store for other guns and items that are available.