So, out one night at club, enjoying the night, we have a friend of ours come over to us.
"So I was thinking about something and as I thought about it you came to mind, considering I've seen some of the prop work you have done."

Now generally when a statement like that comes up I have two thoughts, one "Oh great what is this going to be", and "Hmm i can't help but be intrigued as to what your thinking of making." So of course I hear him out :).

"Do you know the comic The Runaways?"
Off the top of my head not really I think I flipped through one once. But, already I'm curious as to what in a comic world he would be talking about. So we chit chat for a bit about these gauntlets that he is thinking about. I already like the idea as I honestly love the challenge of making functional gauntlets... it's just always fun when your done sitting there and flexing your fingers and such they always tend to put you right in the roll of who they are made for. The next day I do what I always do, research :). I find as many digital copies of  "The Runaways" as I possibly can and start reading them. Specifically focusing on Chase Stein a.k.a. Talkback. Right after I see him get his "Fistigons" I'm intrigued, for those of you out there that aren't verse in what these fistigons are here's a bit of info.


"The Fistigons were metal gauntlets with built-in flamethrowers. The gloves allowed the wearer to mentally shape the produced flame into any form the wearer desired."

The next day he catches me online and sends me this picture. 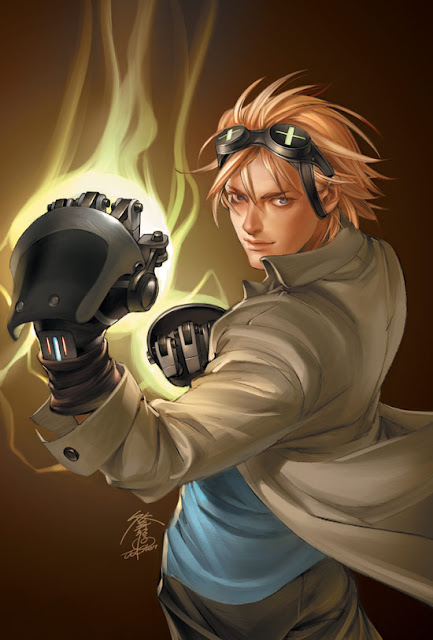 My first thoughts are, "ok well two ways I could do this 1 I could make them technically accurate to the comic, but there goes the use of your hands since they would have to be worn over your hands and the fingers would be way to thin to put a hand in. The other way would be to screw being exactly accurate to it and making them close to it."

So, I kept researching a.k.a. I read more comics :). As I read on I found out that the original ones basically get destroyed and then later on get replaced. When I see the second version, aha that is a bit more like it, that I can make work. At the same time I'm trying to crank out some flyers for the next two months for deathwish... and make a costume for both me and my girl for the one that is only 2 weeks away at this point. (which you can go see here :), Paine and Vincent Valentine) So I've got a lot sitting on my shoulders and yet don't want to disappoint. I have him over and we get to talking about a few ideas on what he's thinking, which always helps. The original thought was I would just be helping him make them, help him work out the technical aspects of how to make them work and look good.  After that i crank out the flyers, get the costumes mostly done, and get everything starting to settle down a bit. At this point there is only 1 week left before he needs them, looking over the time I've got to realizing it's going to be kind of hard to get our schedules to match up and get enough time in to actually get it done, so instead I decide "you know I like this guy and honestly have been trying to make this work for a good 2 weeks now and only have a few days left, screw it I'm going to get these done in the next two days and surprise him with them." So I sit down one morning and start to work on them, I had already had tons of thoughts on how I was going to do them, so really it was just getting it done. I worked up some templates, since I was going to do both gloves it's much faster to get yourself some template that are easily modified to make sure everything works before going to work on the finished product. So after I got them all done i quickly took some pictures of them before I went out to deliver them.

I took them out tucked under my coat started chatting with him bout how things were going and if he was still going to do chase.
"I don't know at this point"
"Well how much do you have left on it?"
"Pretty much everything"
"Well I think I have something that will help with that" and I pulled them out of my coat...He was very happy and wore them most of the rest of the night :)

So with out further ado, here are some pictures of them before I gave them to him (literally right before i left the house :) 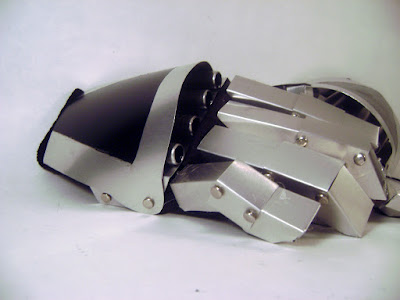 Covers over the back of each hinged at the knuckles 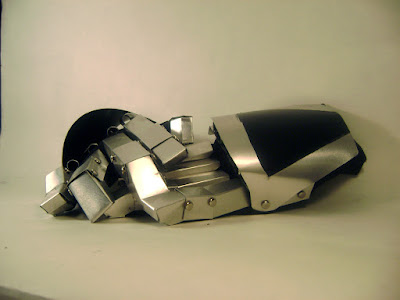 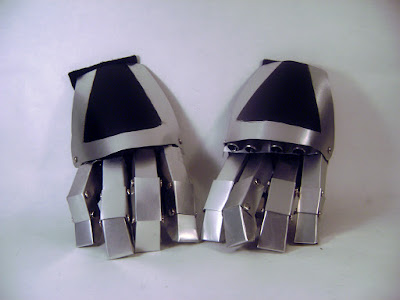 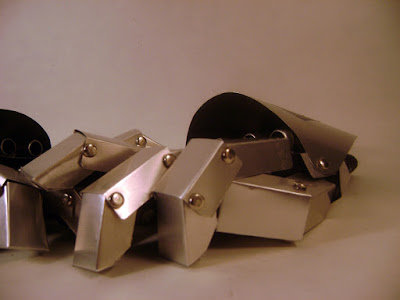 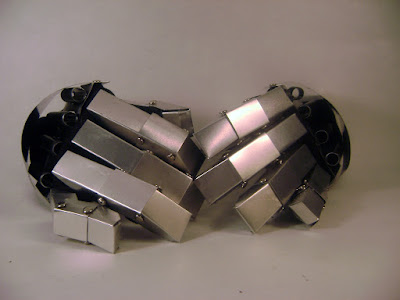 Mock barrels to try and match the Fistigons flame barrels 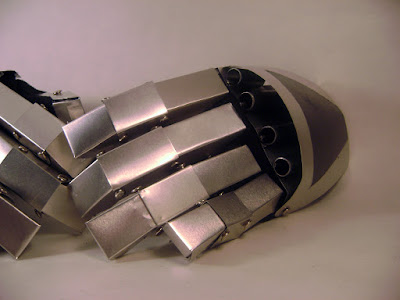 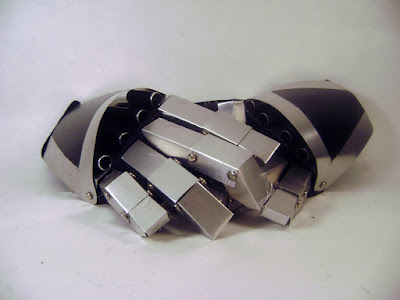 Unfortunately I didn't bring my camera with me when I gave them to him. If I ever get a picture of him in them I will have to post them here. :)