February Deathwish turned out to be theme after the Seven Deadly Sins. As we started in to figuring out what we would dress up as we ended up realizing that it would be a challenge to noticeably embody one of the sins. My girl honestly knew what she was doing right off the bat...Wrath, which also works well considering there are 6 dancers so at least 6 of the sins were going to be done up on the stage. As for me it took me a while to settle on one and then to think up how I could add my own spin on it. After a while I finally settled on Vanity, mostly because I thought it would be one that I could pull off.

Her Seven Deadly Sins Costume - Wrath.
She already had some ideas on what she wanted. So she drew up her ideas and we tried to work out what we would need and how to do it. This one was fairly simple comparatively, we made a battle torn and "blood stained" tank top for her to make it look like she had gone through a bloody battle with some other wordily creatures. Then a ripped "all to hell" petticoat which the cats gladly help rip up with me, to go under one of her skirts. I also made her some fuzzy boot covers to give her the demon hoof look to her boots. A few accessories, spiked collar, bone necklace, studded gloves, and fuzzy bracelets helped finish off the look. Once her make up was done and her hair spiked she looked amazing. 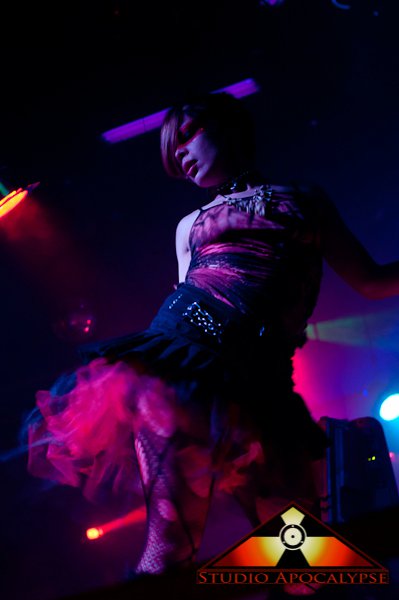 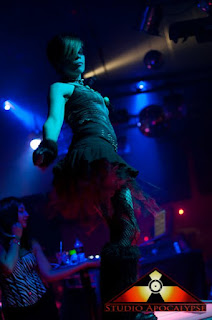 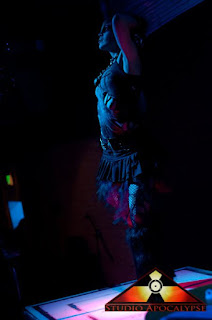 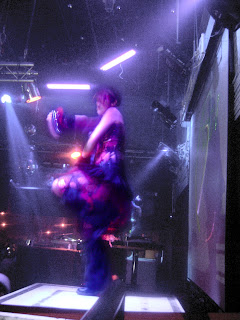 My Seven Deadly Sins Costume - Vanity
This one was a bit harder for me to envision but in the long run I went with one of my many jackets, a very shiny button down i made just for this costume and basically just dressed up for it. The things that I made to give it the costume feel was the mirrored accessories :). I wanted to go for the look of shattered mirrors on my ankles, wrists, and a mask. As I didn't think they would look to kindly on me showing up covered in shattered glass, I went with light weight aluminum instead. The cuffs were fairly easy and I still usually wear one out to clubs now. The boot covers were almost as easy just a bit bigger, the mask however I took the most time with. Amazingly after working with all the metal I didn't cut myself once on it. Here are the few pics of me out in the costume. 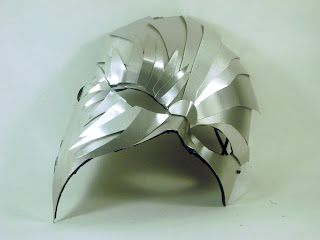