So if you haven't checked out my Youtube channel I recently got myself a Nerf Stampede ESC about 6 days before it was supposed to be officially released. Thanks to my wonderful Girl, we went searching and found it. As we were going through the check out this very nice gentleman let us jump in front of him in line since we only had like 3 items, which he may have regretted since as the Stampede was scanned it came up as "Do Not Sell" which then we got many comments from the check out lady that "that generally means it's been recalled for some reason" as we waited for a manager to sort out the issue we chatted with her about how they had like 30 of em on an end cap and how we thought it was new. Now of course I already knew it was saying that because it wasn't officially released yet, but I wasn't about to blurb that out and miss my chance to get it early. Finally we got a very nice guy that came up and had that "yeah i know this isn't supposed to be on the shelves yet, but since it is, we gotta fix this." look. He told her to ring it up anyhow and she had to put in the info for it which it was listed on the receipt as a "Nerf NStrike" :). We finally got out of the store and got home. After dealing with some stuff I proceeded to open it up. First off the box honestly is the biggest Nerf box i've come across. 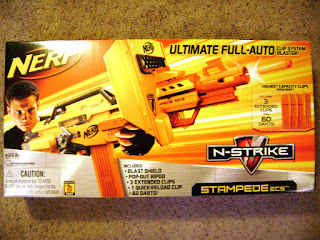 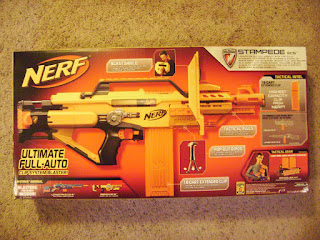 So I got it open, unboxed, put the batteries in and loaded it up and then had some fun with our wonderful little nerf addicted cat, Bastion. Yes, our cat LOVES nerf guns, more specifically chasing the darts around, which ends up with a few chewed up on occasion but a small price to watch the little beast running around all crazy like.
So after Firing off over 100 darts all over the place, messing around with accessories and having fun with the cat I Decided I was going to have to do some range tests and make a video to share with the Nerf fans out there. Unfortunately, it was already dark out, so it had to wait till the next day.

You can jump over to my Youtube Channel or just Click here to see the range test, Rate of fire, and accessories that came with it. While your over there please take a second to subscribe and leave a comment for me.

So with all that said, let me get down to the nitty gritty of this post..


The Review.
So now that i've had the time to mess around with it let me give you my honest opinion. Overall the Stampede is a pretty awesome Nerf Gun, with a few down sides. When we got it the price was a bit much ($50) but with the hopes that it would live up to the hype we got it.
Out of the box it comes with:
3X18 dart clips and 1X6dart clip... honestly the 6 dart clip seems a bit pointless, but it does round out the number of darts to an even 60 you could have in the clips at any one time.  The 18 dart clips "the highest capacity clip nerf has made" Clip yes. Drum no. honestly would have preferred 3 drums over the 3 clips but they work well and are worth it anyhow. My main complaint is with the 18 dart clip in the gun can not be set down on the bi-pod. Small complaint but if your camping it out and want to put the gun down you either have to lay it on it's side or take out your clip. Where as with even the raider's 35 dart drum it can sit on the bipod and be ready to fire. 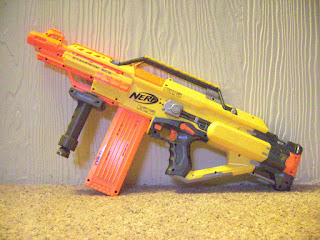 The blast shield... honestly a little gimmicky but I could see it being useful in a nerf war. It's about a foot across and about 6 inches off the top of the gun, with a small "grilled" view port. It is compatible with other N-Strike guns but on some it sits to far back to be of use as it covers the handle or makes priming the gun awkward at best.

Nerf Stampede ECS with Blast shield and Bipod
The Handle/Bipod... Very nice little addition to the Stampede, it works a a handle when your running around and press a button and poof you've got yourself a bi-pod to set it down on, great for a defending position. To be honest though, it would have been nice to have it slide in from the back of the bottom rail to let you grab it and hoist the gun up, as is if you try to lift the gun with it it just slides right off. One small little change and it could have been even better. While it is compatible with other tactical rail set ups, very few other guns have a rail on the bottom of the gun, so it doesn't really lend it's self to other guns.
The Stampede ECS... honestly for the price you expect a lot, to shell out the $50 to get it you want it to be pretty awesome. Honestly, it is, with a few small draw backs. The Fully auto feature is pretty awesome considering the Vulcan tried but ultimately was to bulky and the chain was a pain in the butt. With the Stampede if you've got the batteries in, it's a simple task of slapping in a clip and pulling the trigger. Rate of fire is pretty great at up to 3 darts a second, and a quick exchange of clips probably the best rate of fire for a stock gun. The viewing window on the side doesn't serve a lot of purpose but is a nice little feature to see the internals firing. The batteries add a lot of weight to the gun so if your going to be hefting it around for a while I would suggest a strap, that the gun does have places to clip on. with proper timing it's easy to get a single shot off or even "3 round burst". The ranges are actually pretty good for a stock gun hitting an average of 30' with up to '40 in the tests I've done. With no manual cocking, if your batteries die your dead in the water, but I guess it's a small price to pay for all the other features.

Over all I would say it does live up to the hype. Would I suggest this gun? Yes if you've got the money to spend on it :). But the one suggestion I would say is also invest in a drum mag (the raider's 35 dart drum considering the fully auto feature, or the new alpha trooper's "18 dart drum" that you can cram 20 darts in) When Nerf starts selling the Drum mags individually this gun will likely be spraying darts all over the place till then we'll have to make due with either the clips or stealing the drum mags from other guns :).

Nerf Stampede with Nerf Raider's 35 Dart Drum
Nerf Stampede ECS With Alpha Trooper's 18 dart drum mag
Nerf Stampede ECS alpha trooper drum mag, bipod Even with drum mag looks pretty slim
On a note of mods for the Stampede I have not crossed that bridge just yet, but it has some good potential given the normal plunger system and the potential of a higher voltage to increase the rate of fire even more. Stay tuned in for those as I will put up something for it when I can get around to it.