So to break from my normal posts for a few minutes I thought I'd toss out some information on the newest additions to the Nerf line. There was a lot of speculation on what guns would be coming out this year and now that they've finally released some and put out some press on them, I thought it's about time I put my two cents in. :)

First some basic info. 3 of the blasters coming out are store exclusive, meaning they will only be released in certain chains. So just to make it clear as to where you can get them: 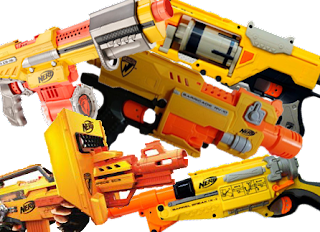 So that said let me try to go over each one... 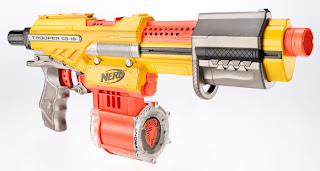 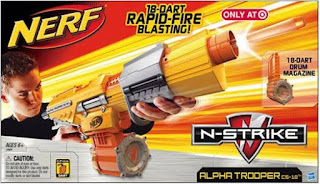 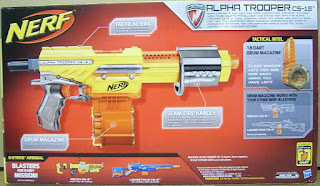 I recently picked up a Alpha Trooper CS-18 at a local target, so I'll start with it. Generally speaking it's nothing all that different than say the Recon or the raider. Basically the same internal reverse plunger system but it does have a nice front "shot gun" like cocking handle and two sling points for strapping it over your shoulder. It does except N-Strike stock but does not actually come with one, which cuts down on the price but honestly it would have been nice to not have to steal off a different blaster just to have a stock. It does not have a barrel attachment point, but frankly that would have been a bit redundant with the already elongated barrel. The one key point on this blaster is the 18 dart drum mag, that can fit up to 20. Opposed to the raiders 35 dart drum, this one is MUCH smaller and a lot less bulky, which at the price of just 15 darts desent trade off. Overall for only roughly $20 it's worth picking up. 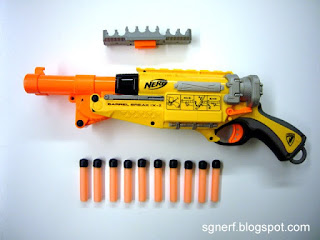 Shot above from SGNerf as it was the best shot I could find :) By all means for a much more indepth review head over to: His Review here Or head over to Nerf Mods & Reviews
Since I have not gotten my hands on one just yet.

Honestly I'm looking forward to getting a hold of one of these. It may not be clip or drum feed, or even have the rotating barrel of a maverick or a spectre, but come on it's basically a double barrel sawed off shot gun right out of the box. as well as the dart clip attachment would be useful and the internals are unique design for once. 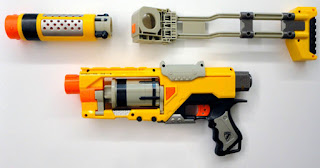 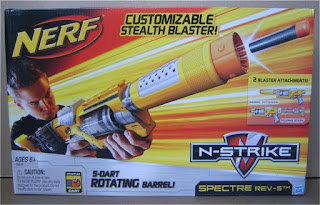 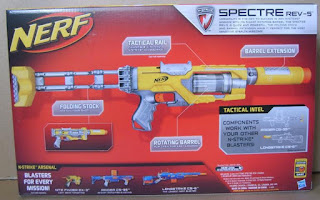 Honestly not sure what to think on this one ... looks like a lesser maverick with attachments. While the look is different I'm not to sure about paying more simply for the attachments and one less barrel. I'll likely pick one up whenever walmart decides to carry the "walmart exclusive" blaster in my area.

Finally and the two they "tried" to keep under wraps. Honestly in this day in age enough fan base and nothing will stay "secret" for long. 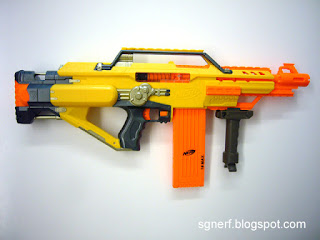 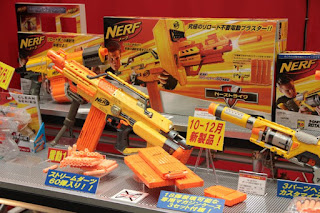 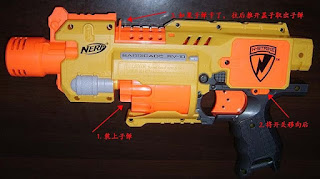 Pros:
Cons:
Trying to find much info on the Barricade rev-10 is a pain at best most info is gathered from leaked pictures and speculation. It is supposed to come with 10 whistler darts, be semi auto, and obviously 10 barrels. 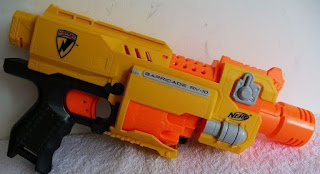 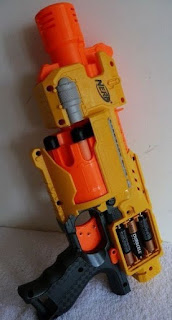